It turns out the front business from “The Godfather” is where the real money is.

A new report from CBS’s 60 Minutes looks at what it calls the “Agromafia,” an estimated $16-billion-a-year business of passing off lesser olive oil, wine, and cheese as high-end food products.

To combat the problem, Italian law enforcement has amped up its food fraud division, which employs 60 tasters who can spot oils that have been tampered with — often diluted with cheap sunflower or canola oil. In the past two years, the unit has seized 59,000 tons of food, some of it contaminated with solvents or pesticides.

The profit margins for high-end food products can be huge. High-quality extra virgin olive oil — made from the first pressing of olives — can sell for $50 a gallon, but a fake can cost only $7 to make. That’s a difference CBS News correspondent Bill Whitaker estimates is three times higher than cocaine.  Law enforcement has found mozzarella bleached with detergent, and rotten seafood covered up with citric acid.

END_OF_DOCUMENT_TOKEN_TO_BE_REPLACED

Based on results of past studies and the fact thatpolyphenols in extra virgin olive oil provide protection against heart disease, researchers at the University of Bari’Aldo Moro’ in Italy decided to include EVOO in the diets of laying hens to determine if it would influence egg quality.

The study, published in the February 2015 issue of the journal Lipids in Health and Disease, evaluated the effects of dietary supplementation of hen feed with EVOO from two different olive cultivars with different polyphenol content on egg quality and egg yolk cholesterol.

In a first of its kind study, researchers divided 150 laying hens into three groups and fed them a normal wheat and soybean meal that differed only in the source of oil for 10 weeks. END_OF_DOCUMENT_TOKEN_TO_BE_REPLACED 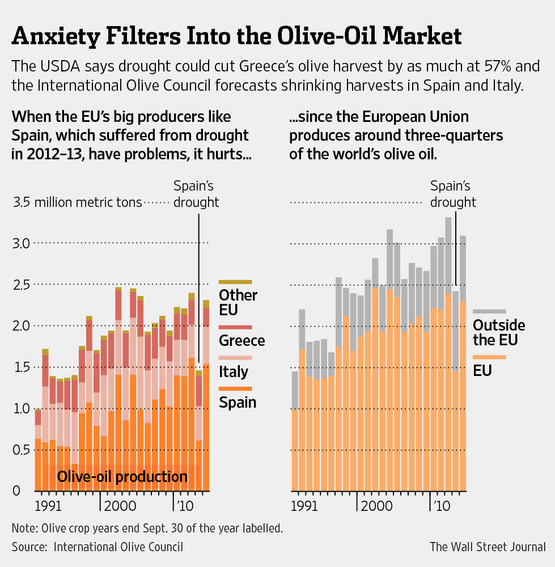 Lovers of Mediterranean salads take heed: that drizzle of olive oil could get a bit more expensive.

END_OF_DOCUMENT_TOKEN_TO_BE_REPLACED

An illustrator and the art director of the New York Times Book Review.

Olives that are used in substandard oil are typically taken to mills days, weeks or even months after being picked — not “within hours.”

Some producers mix olive oil with soybean or other cheap oils, while others mix vegetable oils with beta carotene and chlorophyll to produce fake olive oil; the two practices are not usually combined.

Olive oil bottled in Italy and sold in the United States may be labeled “packed in Italy” or “imported from Italy” — not “produced in Italy” — even if the oil does not come from Italy. (However, the source countries are supposed to be listed on the label.)

A 2010 study by researchers at the University of California, Davis, found that 69 percent of imported olive oil labeled “extra virgin” did not meet, in an expert taste and smell test, the standard for that label. The study suggested that the substandard samples had been oxidized; had been adulterated with cheaper refined olive oil; or were of poor quality because they were made from damaged or overripe olives, or olives that had been improperly stored or processed — or some combination of these flaws. It did not conclude that 69 percent of olive oil for sale in the United States was doctored.